HOUSTON -- A newly released poll shows Ted Cruz in a dead heat with Donald Trump among Republican primary voters in Texas, indicating the state’s junior senator may be destined for a disappointing showing in his home state on Super Tuesday. Cruz and Trump are tied at 32 percent in The Texas Tegna Poll of GOP voters, with Marco Rubio at 17 percent, John Kasich at 6 percent and Ben Carson at 5 percentNORTH CHARLESTON, SC - JANUARY 14: Republican presidential candidates (L-R) more

The poll results are especially noteworthy because the survey was conducted over the weekend, after Trump defeated Cruz in the South Carolina primary.

“If it’s correct, it’s over for Cruz and Trump is the nominee,” said Bob Stein, Rice University political scientist and KHOU political analyst 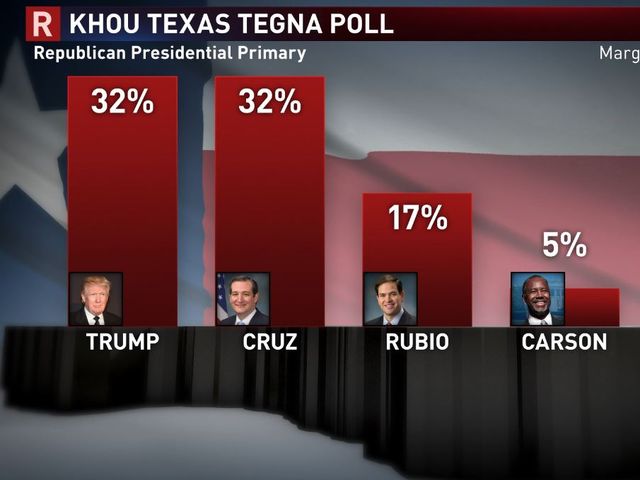 Cruz himself acknowledged the importance of the Texas primary in next week’s Super Tuesday voting, but he conspicuously avoided speculating on whether he would win a majority of GOP votes here.

“I believe next Tuesday will be the most important day in the entire presidential election,” Cruz said. “The crown jewel of super Tuesday is the great state of Texas.”

Cruz had hoped to win Texas by a substantial margin, offering him a trove of delegates before the primary map moves into states considered less receptive to his evangelical message. The primary schedule is also moving into winner-take-all states where second place finishers walk away empty handed.

“All the primaries from now on after Super Tuesday are winner take all,” Stein said.  “And the winner in the primaries has always been Donald Trump.”

Cruz and Trump effectively tied among a wide range of GOP voting groups, including men and women, older and younger voters, gun owners and non-gun owners and Republicans with and without college educations.

The poll also indicates comparatively few primary voters are still up for grabs, with only 6 percent declaring themselves uncommitted or undecided.

Hillary Clinton’s deep roots among Democrats in Texas – where her husband started building a network of supporters when he campaigned for George McGovern more than 40 years ago – are apparently paying off with a substantial lead over Bernie Sanders. Clinton is supported by 61 percent of surveyed Democrats compared to Sanders’ 32 percent.

According to a newly released poll, Hillary Clinton is supported by 61 percent of surveyed Democrats c

The poll also found Texans almost evenly divided on the question of whether the late Supreme Court Justice Antonin Scalia’s replacement should be chosen by President Obama or the next president. About 41 percent of surveyed voters said the decision should be left to the next administration, while 38 percent would leave the choice to the current president. The other 21 percent said they didn’t know enough to offer an opinion.

The latest presidential primary poll results raise the stakes even higher for Thursday night’s GOP presidential debate on the campus of the University of Houston, offering Cruz a high-profile opportunity to score points against Trump before a hometown crowd and a nationwide audience.