Breaking: XMAS Surprise everyone who wants ObamaCare is completely exempt. Obama just came out and said, sorry for the website anyone can get insurance for free if you want. '. Administration faces backlash over new ObamaCare exemptions: Original Story FOXNEWS. 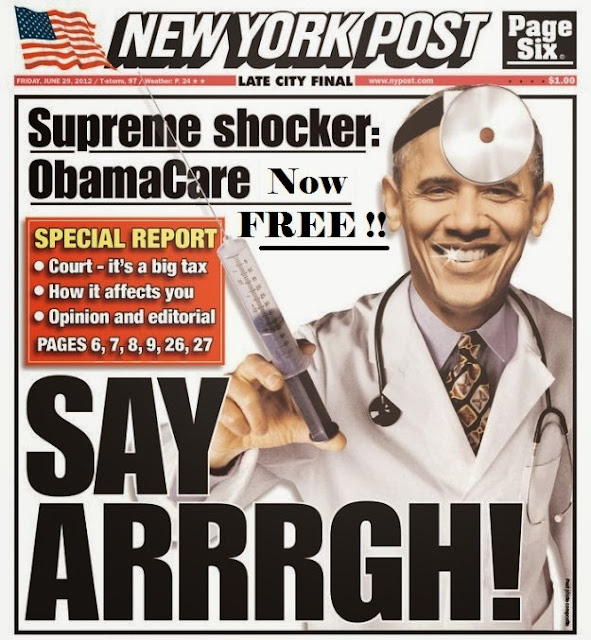 The Obama administration, in an 11th-hour change, announced significant exemptions for people who recently lost their insurance coverage and are struggling to get a new plan -- drawing immediate criticism from the insurance industry and Republican lawmakers.

Health and Human Services Secretary Kathleen Sebelius confirmed the changes, which include letting those individuals skirt the law's individual mandate, in a letter to senators. She said she would allow people who got cancellations and could not find affordable new coverage to qualify for a "hardship exemption" in order to avoid a penalty next year for not having insurance.
Further, she announced that those individuals will be able to purchase bare-bones plans that until now were available only for people under 30.

The move, though, to allow potentially hundreds of thousands of people to sign up for "catastrophic" coverage plans was criticized by the insurance industry as a shift that would cause "tremendous instability.”

The administration, which made the announcement right before the holiday break and as President Obama prepared to fly to Hawaii for vacation, downplayed the sudden change, saying they expected it to impact fewer than 500,000 people.

Health and Human Services spokeswoman Joanne Peters said, "This is a common sense clarification of the law. For the limited number of consumers whose plans have been cancelled and are seeking coverage, this is one more option."

An insurance industry official told Fox News that while the administration was playing down the significance of the move, it could turn out to be a troublesome last minute change and the industry fears far more than the 500,000 people will apply.

Another industry official, America's Health Insurance Plans spokesman Robert Zirkelbach, said, “This type of last-minute change will cause tremendous instability in the marketplace and lead to further confusion and disruption for consumers."

Democrats praised the steps as a common-sense backup in a difficult situation while Republicans panned the administration action as another patch to an unworkable law.
"Holding a fire sale of cheap insurance is not a responsible fix for a broken program. This is a slap in the face to the thousands of Americans who have already purchased expensive insurance through the ObamaCare exchanges," Sen. Marco Rubio, R-Fla., said in a statement.

House Energy and Commerce Committee Vice Chairman Marsha Blackburn, R-Tenn., described the move as "another major policy shift" from the Obama administration.
"We asked Secretary Sebelius point blank what would be the next holiday surprise, and she was silent. Yet, here we are with another major policy shift. The sad reality is that when the law takes effect come January 1, more Americans will be without coverage under Obamacare than one year ago," Blackburn said in a statement released Thursday evening.
"Less than two weeks from going live, the White House seems to be in full panic mode. Rather than more White House delays, waivers, and exemptions, the administration should provide all Americans relief from its failed law."

On Thursday, the administration estimated at less than 500,000 those who have not yet found other coverage in the wake of seeing their coverage canceled.
Obama was roundly criticized for reneging on a longstanding promise that if you liked your plan, you would be able to keep it under his health care law. The president apologized, and then said insurers could extend those plans for one more year. Most state regulators followed Obama's lead and gave insurance companies the additional latitude, but it's unclear whether the problem has been fully resolved.

Insurers are concerned that healthy customers who potentially would have bought full coverage may now stay out of the market, leaving the companies with a group of patients in worse health overall.

Fox News Ed Henry and The Associated Press contributed to this report
Posted by Sick Bias at 8:14 AM